Today’s book review, as you may have already guessed, is Percy Jackson and the Lightening Thief by Rick Riordan 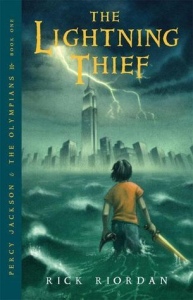 If you haven’t guessed by now, I love Rick Riordan books.

I think I have read all of his ‘myth’ books, except the Trials of Apollo series … I’m a little behind on that one, so this is not the first time I read this. Nor the second, or the third.

But this is the first time that I listened to this on audiobook.

Percy Jackson is a good kid, but he can’t seem to focus on his schoolwork or control his temper. And lately, being away at boarding school is only getting worse – Percy could have sworn his pre-algebra teacher turned into a monster and tried to kill him. When Percy’s mom finds out, she knows it’s time that he knew the truth about where he came from, and that he go to the one place he’ll be safe. She sends Percy to Camp Half Blood, a summer camp for demigods (on Long Island), where he learns that the father he never knew is Poseidon, God of the Sea. Soon a mystery unfolds and together with his friends—one a satyr and the other the demigod daughter of Athena – Percy sets out on a quest across the United States to reach the gates of the Underworld (located in a recording studio in Hollywood) and prevent a catastrophic war between the gods.

Now what to say about this book.

Simply it is amazing.

I love how effortless Riordan writes and creates a world that you come to believe is entirely possible. He takes little details from everyday life, stuff you wouldn’t think is important and turns them into something much bigger.

Not only is his world building effortless he doesn’t assume that you know anything about the topic … the topic being the Greek gods … and slowly he educates you. This book focuses mostly on ‘the big three’ as Riordan calls them and a few of the other twelve major Olympians. He doesn’t overload you all at once and he has created a character in Percy who is as ignorant and unaware (in the nicest way) as the reader is or could be. (I don’t want to claim any ignorance on your part). As the world and characters he has created educated Percy, he educates the reader.

I have favourite characters in each book, and the change, like most things depending on my mood. In this book I think it is Grover. He is the first ‘non-human’ (a term used loosely in relation to this book, when the majority of the characters are half god) that we really get to know and Riordan writes his idiosyncrasies and quirks into the story as if they were nothing. Like eating is cutlery and plates, or tin cans when he is nervous. Swallowing apples whole. He is a unique character and one of many.

This book has a lot of potential and a lot of growth room … something Riordan proved with just how many sequels and spinoffs Percy Jackson has that are all interlinked and create an intricate world for young and old to enjoy.

My only problem I have with this reading of the book is the reading.

For the first time I listened to it in audiobook format. The reading isn’t bad … but it left a lot to be desired. It didn’t keep me awake … the narrator was a bit of a drone really and there is little difference between the character’s voices.

One thing I had forgotten when it came to the book is what a twist the ending had. I shan’t reveal much but just when you think it is all over, to use my favourite rollercoaster analogy, when you think you are about to glide back into the station and get off and start queuing up for the next ride another dip comes out of nowhere and sets your adrenaline pumping all again and leaves you wanting more.

I would recommend this book, in fact the entire series and the author’s entire library, to anyone. It is an amazing read.

Please, if you have read it, let me know your opinion down in the comments.

9 thoughts on “Percy Jackson and the Lightening Thief Review”