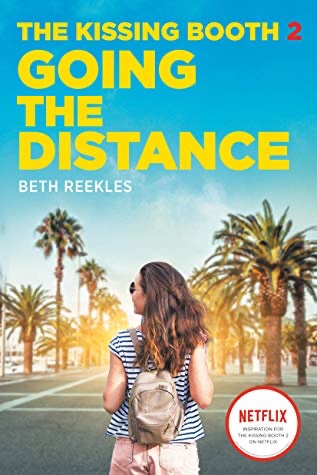 Hi all my bookworms!

My review for today is Kissing Booth 2: Going the Distance by Beth Reekles.

Blurb: Elle Evans seems to have finally tamed hotter-than-hot bad boy Noah Flynn, but now they’re facing a new challenge. Noah’s 3,000 miles away at Harvard, which means they’re officially a long-distance couple – and it’s tough. After all, there’s only so much texts and calls can satisfy – and when Elle sees a post which suggests Noah’s getting friendly with someone else, she’s devastated.

On top of that, it’s hard to ignore new boy Levi. He’s gentle, sweet, cute – and definitely interested in Elle.

With her heart on the line, what’s a girl to do?

Join Elle, Noah, Lee and all your favourite Kissing Booth characters for another amazing romantic story that’s sure to have you swooning.

First of all let me say how excited I was for this book. Like really excited. So excited that when I found out I jumped on my friends bed for a full five minutes straight. I read the first in 2012/13 when I was in sixth form and I loved it. It was amazing. The best thing since sliced bread! And I never wanted a second book. Reekles had summed the book up in such a way that you were happy that the characters were going to get on with the rest of their lives and I wasn’t pinning to know what that was. I have read it a few times over the years, always being a book that I was drawn back to.

When I watched the film I was very in the middle with it. The essential story was the same Lee and Elle … best friends. Noah and Lee … brothers that fight each other and still, at the end of the day love each other. Noah and Elle … well, we all know what happens there. But the other parts, well there was some discrepancies. But overall I enjoyed the film.

When I found out there was book 2, I was, as I already said, excited. I didn’t need a follow on, but I won’t complain if you’re going to give me one. I bought it on release day.

I started reading straight away and the first thing I noticed was that a lot of time has passed between book 1 and book 2. Obviously I know the book were written a few years apart but you can feel that time has passed between the books even thought it’s only a couple of months further on for the characters. The first book seemed to exist out of time for me. The characters text each other a lot but they didn’t mention social media or the Xbox one or so many this that this book did which makes this book feel dateable.

Another thing that really got to me about the book is when I finished it I was left with the feeling that the book had been written just because. There was no reason to write another book. In my opinion, the story didn’t need it. And because of that the story felt like it was flat. I didn’t feel any real arc to the story and a lot of what happened felt predictable.

Having said all that part of me wonders if I feel this disappointment because I’d hyped the book up so much. I want it to be fabulous, to be on par with the first book, and it was bound to fail. There were parts I loved the writing style gave me the same sort of feelings as Kody Keplinger’s work, all warm and fuzzy, all the awwwwws! I laughed and at moments I felt the corner of my eyes start to sting. The emotion was all there.

I hope I haven’t put you off this book and I expect you to read it and let me know if you felt the same things as me, or if none of this bothered you?

To finish this I want to leave you with one of my favourite paragraphs from the book.

I’d been on the pill for over a year–not so much because I’d needed the contraception at that point, but more to balance out my irregular periods–but it looked like my dad was treating the situation like alcohol at parties: he knew it was gonna happen, and he knew he couldn’t stop me, so he just wanted me to be safe about it. Even so, I hissed, ‘Yes, Dad. God. I’m a responsible adult.’ ‘Yesterday you were playing Disney soundtracks. And singing along.’ ‘Responsible adult. I’m going now.’

Until next time, Happy Reading!

Edit: Anyone looking for my film review you can find it here.

5 thoughts on “Review| The Kissing Booth 2: Going the distance”