Hi all my Bookworms!

My name is Chiara and I am a bookworm.

In my last review, P.S. I Still Love You by Jenny Han I told you that I had started using CAWPILE to rate my books. If you are still unsure what CAWPILE is or you didn’t read my last review (I recommend you do) I’ll break it down for you here. To begin with I really recommend that you check out Book Roasts video here where she explains what it is and how to use it. She explains it a lot better than I can. However my very brief explanation is that CAWPILE is a star scoring technique where you break the aspects of the book into different categories: Characters, Atmosphere, Writing, Plot, Intrigue, Logic, and Enjoyment. You give each category a score out of ten and then the fantastic spreadsheet that Book Roast has created for us give you an average and works out what that average means in terms of stars.

Like in my last review I’m not going to brake down my CAWPILE score, but if you want me to let me know down in the comments and I will.

Today I am finally reviewing The Hidden Oracle (Trials of Apollo #1) by Rick Riordan. 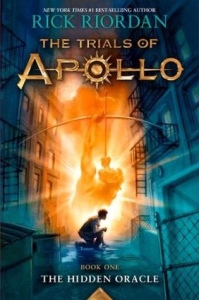 This book is set about six months after the end of the Blood of Olympus, which in case you haven’t read it, I won’t spoil, also because I don’t think I have read it. Apollo has been banished from Olympus and turned into a mortal human being with the name Lester Papadopoulos who has acne. No powers no special skills. Not even ambrosia or nectar will cure him.

And to make matters worse he has been claimed by young demi-god, Meg McCaffery, and he has to work for her until his punishment is finished.

Apollo has always been one of my favourite character in the Percy Jackson & the Olympians series and the resulting spinoff, The Heroes of Olympus. He is such a unique character. Always so full of himself and even as a mortal, or should I say as a god, he has a rather inflated sense of self importance. He expects everyone to listen to him, to bow down at his feet and praise him. Let me tell you, it doesn’t happen. Least of all from Meg who has no regard for him whatsoever.

I love the stories that Apollo manages to remember from his past. Often parts of his godly history are a struggle to remember. He’s gone from a godly body with enough ability to remember every single detail from the last 4000 years to a human body with a (to paraphrase Apollo) a mind the size of a kiddy pool. His stories of who he’s loved and influenced in the last four millennia are hilarious.

However this is a lot of talk about Apollo (which he should appreciate) and there are so many other characters in the book. You see a lot of old favourite characters from previous books including Percy Jackson, Nico Di’Angelo, Connor Stohl, Will Solace and Chiron. It was good to have a story that was based more in Camp Half Blood especially after all the changes that have gone on since the Heroes of Olympus series. I love how old and modern the Camp seems to be all at the same time.

As always with Rick Riordan the writing is brilliant. I tend to listen to my audiobooks hile walking around Paris and I would often have to stop myself from laughing out loud in the street. My only problem is that maybe it was too camp based. With every single book that Riordan has written they have traveled across the country escaping death at every turn. As much as spending more time at Camp Half Blood was brilliant, it diluted some of the excitement for me.

I think you may have already guessed who my favourite character is. Apollo. But a close second would have to be Meg McCaffrey. I love her little friend who protects her (read the book to find out who) not that she ever needs much protection. She is perfectly capable fighter on her own. With who her godly parent is (again read the book to find out who) I wouldn’t have expected sword fighting to be a big part of her repertoire but it does make sense once it is explained.

Overall I loved this book. I would recommend it to all readers young and old. And I feel I must conclude this review with a complement to Rick Riordan. He is such a brilliant writer and his range of knowledge is amazing. He must put so much effort and research into these books to come up with the obscure knowledge represented in these books. We long ago passed the level of knowledge that I have in Greek and Roman (or any) mythology and now every book is like the best history lesson I have ever had.