To all my bookworms,

I have recently finished reading Of Curses and Kisses by Sandhya Menon. 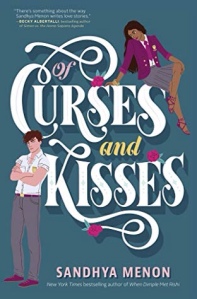 The first novel in a series set at an elite international boarding school, that’s a contemporary spin on Beauty and the Beast.

Will the princess save the beast?

For Princess Jaya Rao, nothing is more important than family. When the loathsome Emerson clan steps up their centuries-old feud to target Jaya’s little sister, nothing will keep Jaya from exacting her revenge. Then Jaya finds out she’ll be attending the same elite boarding school as Grey Emerson, and it feels like the opportunity of a lifetime. She knows what she must do: Make Grey fall in love with her and break his heart. But much to Jaya’s annoyance, Grey’s brooding demeanor and lupine blue eyes have drawn her in. There’s simply no way she and her sworn enemy could find their fairy-tale ending…right?

His Lordship Grey Emerson is a misanthrope. Thanks to an ancient curse by a Rao matriarch, Grey knows he’s doomed once he turns eighteen. Sequestered away in the mountains at St. Rosetta’s International Academy, he’s lived an isolated existence—until Jaya Rao bursts into his life, but he can’t shake the feeling that she’s hiding something. Something that might just have to do with the rose-shaped ruby pendant around her neck…

As the stars conspire to keep them apart, Jaya and Grey grapple with questions of love, loyalty, and whether it’s possible to write your own happy ending.

I know that often I ask too much from books.  I want them to be my everything.  And so often I am disappointed.  This book’s burb said ‘boarding school’ and ‘beauty and the beast re-telling’.  The bar was set pretty high.  It did not disappoint.

Personally I would love to write a Beauty and the Beast retelling.  It is my favourite fairy tale but my question always is How do you write it without giving the heroine Stockholm syndrome?  This is something that Menon has managed to do. In fact Menon has managed to twist it so that Stockholm syndrome isn’t even a question.  Jaya and Grey are beautiful unique personalities and are slaves to the world around them.

In certain ways this book gave me big ‘Pride andPrejudice’ feels.  In that book as I am sure many of you know, when reading it you don’t know between Elizabeth ad Mr Darcy who is the proud one and who is the prejudice one.  Both characters are prejudice against the other’s station in life and then again they are both proud of who they are and what they have ‘achieved’ in their life.  Like that I would be hard pushed to say who was the ‘beast’ and who was the ‘beauty’.  I think the words can be used to describe more than just their physical aspect.  There are times Jaya, our heroine, is more beastly in her actions than Grey, our hero.  Her actions are dark and disgusting, though done mostly with good intentions.  On the other hand Grey, who has lived his entire life trapped in the dark bubble believing he is a bed person for actions well beyond his control, has moments of pure light and brightness and well, beauty.

I didn’t love many of the background characters.  At times they felt flat and 2D, as if they were only there to perform a purpose, but at other times they felt so real and deep and well formed.  My favourite, outside of our main two characters has to be Daphne Elizabeth, or DE for short.  Her drama threatens to eclipse the drama happening between  Jaya and Grey but she is, in the end a good friend to both Jaya and Grey and gives them the chance that they both deserve.

One thing I feel I must comment on before I roundup this review is the different cultures included in this book.  With all the languages I have learned in my years I have developed a love for different cultures.  I find their way of life intriguing and if I ever went back to university I would love to study anthropology. Indian culture is one that I must say, I know nothing about.  This book offered an intriguing insight into their culture.  I know that India has no royal family however, as explained in the book, the old royal families still have a lot of power and sway in their respective areas.  This book discusses the duty and responsibilities that comes with those titles, and whether hose duties and responsibilities should restrict what that person wants to do and their passions and loves.

This was the first book that I have read by Menon and I am definitely going to check out more of her work.  Have you read any of her stuff?  What would you recommend?

Overall I really enjoyed this book and I could hardly put it down by the end reading into the small hours of the morning to finish it.  Any Beauty and the Beast fan would love this as well as any Pride and Prejudice fan.  I hope you decide to pick this book up and let me know what you think.

7 thoughts on “Review: Of Curses and Kisses by Sandhya Menon”